August 19, 2018
I have always had a competitive spirit especially when it comes to racing of any kind. I loved race cars as a kid and in College I even picked up Mt Bike racing. It only seems inevitable that after becoming a paddler that it was only a matter of time before I got into a canoe race. I just never thought it would be in such a spectacular manner. I found the Deux Pipe paddle on Facebook about 3 weeks before the race and did my research. I wasn't able to find out much other than an entry fee and a location. So with this lack of information I snagged a Co-worker (Jason), threw a canoe on top of the car, tossed paddles in the trunk and off we were to the races!

The race is called the Deux pipe paddle because the length of the race is equivalent to 2 Pipes in voyager measurements and has a historical spot at Fond Du Lac for the Start. Racing up and down the St Louis you are following a historical voyager route where the American Fur Trading Company had a post and only a few blocks away you can see a first nation graveyard being worked on for protection. Given the Historical Nature of the race we thought it would be a cool idea to go wearing the famous toque and sash of the voyager era and of course sing songs! Once we arrived we already had a stir of people going noticing the unique attire and of course the non racing canoe at a canoe race. The event coordinators we so nice to us and gave us a few tips towards racing (even though it didn't help the outcome much). We quickly picked up the name "the voyagers" among the racers.

After a short race meeting we put boats in the water and got lined up for the start. My boat Elizabeth is one of my proudest possessions even thought she is beat up, old, and not very pretty, she is my pride a joy. That being said... It was about 1 minute after the start of the race that we realized that we could never propel her large hull fast enough to keep up with the rest of the boats. We managed to keep up with 2 guys in a Minnesota 2 for at least the first 1.5 miles. We kept up a constant stream of banter between Jason and I and when we were next to the guys we started causing them to chuckle. It was when we stopped for water that we truly fell behind and that left us alone for the rest of the race.

We continued to paddle on for the rest of the race singing and enjoying ourselves. When we made the half way mark turn we made sure to be belting Cest Laviron and heading back up the St Louis we sang the whole time. We were slowly loosing sight of the people we were "chasing" and when we passed some fishermen they said "You guys aren't racing those canoes up there are you?". With a slight chuckle we responded by saying that we were at one point. We made the return to the finish line signing another classic voyager tune and there was lots of cheering as we finally finished the race!

We came in last place in the race but at the end of the day we had fun and paddled. That's all that really matters to us. During the prizes we got recognized for coming in last due to us "Taking our pipe break". I ended up winning a paddle which I now have used to replace my old plastic one so now Elizabeth has two wood paddles with her. Sometimes its not about the destination (or winning) but it's more important to enjoy the ride and that day on the St Louis I think we won. 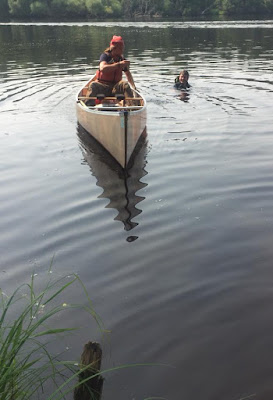 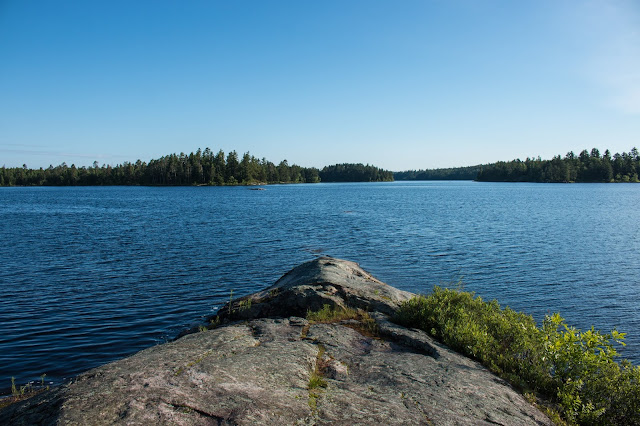 I have never been and I probably never will be an amazing writer but just like singing, and playing instruments I'm not going to let my lack of ability stop me from having fun and practicing the things I find entertaining. So here we are.... A blog. Or a collection of writings? or Songs? Idk what will end up here but I hope that it is enjoyed by those who take the time to view it. Prepare for trip logs, thoughts, experiences, lessons, and whatever I decide is worthy of this "blog". I leave you for now with an image of Crooked Lake looking out over the water as a reminder of what it means to move forward onto a new adventure 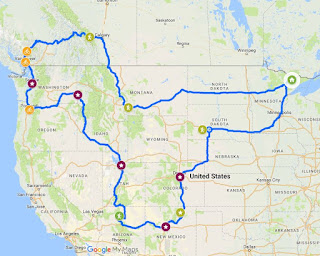 It's been a long season up here in Northern Minnesota but it is time for it to come to a close and I am now putting the last few things in my car. I'm heading west in search of god knows what. Maybe you could say that I'm having a early age crisis but I really don't know. I have a calling to hit the road and travel to new places so that's what I'm doing. The open road, my Mini and me. We will be starting with a trek to Montana where I will be backpacking through Yellowstone. From there it's up in the air (literally). Right now the forest is burning through British Columbia and Alberta spitting lots of smoke into the air which makes for poor air quality. I won't be able to go and enjoy those places if the smoke is taking over. Fortunately, if the fires do keep me away from Canada I still have many places to see in the states and I will definitely be kept busy. Either way this trip could be what I need. It's  a big step for me not to be going back to s